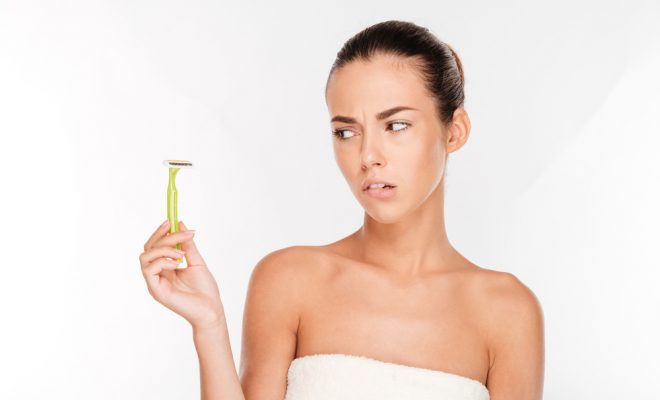 A woman from Hounslow was preparing for her date with Peter from Plenty of Fish when she made a shocking discovery.

“I laughed it off when my mum suggested shaving above my knee,” explained Deborah Frank, 22, “but then I googled it, and apparently people do…” Deborah’s voice then trailed off as she re-lived what we presume was probably a montage of all the horrible disgusting traumatic things she’d seen on the internet.

“I was in the shower and decided I had to go for it,” explained Deborah. “People are doing all sorts of nonsense to their crotches and turns out the anus is no exception.”

Deborah described how she reluctantly pulled apart her cheeks and shaved away several surprisingly long and straggly hairs. She then carried on with her shower routine as usual.

“I reached for my towel and started thinking about all the possibilities. Eyes might be the window to the soul, but the arsehole is almost definitely a catflap that a particularly determined man might one day try to stick his dick in.”

She said she felt like a completely new woman, explaining: “the hairs had to go for me to be able to grow.”

Deborah thought that perhaps her newfound confidence would mean she’s now irresistible towards men, who like women’s arseholes to be as hairless and puckered as a sphynx cat in winter.

She took in a deep breath and bent over her bathroom mirror, and was shocked to find it just looked like the same old anus it’s always been, but bald.

Deborah was so disappointed that she cancelled her date and hasn’t left her house since.

← Previous Story Seven easy-to-apply football metaphors to soften the blow of breaking up with him at half time
Next Story → “Stop mansplaining!” Woman refuses to listen to the basic rules of her boyfriend’s poker game before ruining his poker game