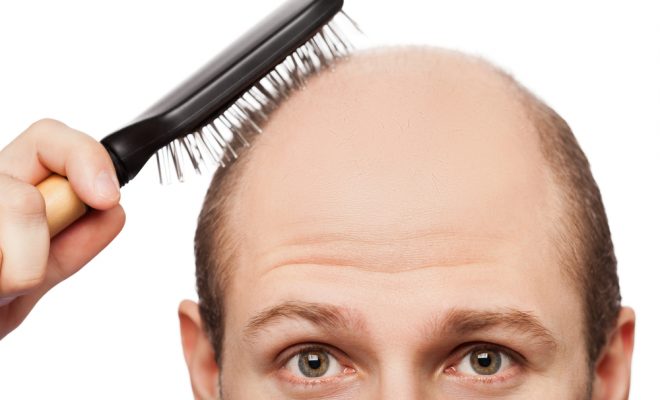 It was Michael’s hair that first attracted Louise to him. Thick and glossy. A light oak with streaks of sunkissed blond. The virile mane of a Hemsworth brother.

“I really can’t emphasis how nice his hair was,” emphasised Louise Anderson, 27. “His face is fine, a decent seven, but his hair… his hair was… just wow.”

Two years into their relationship, however, the unthinkable happened.

“At first I thought I was imagining it,” said Louise. “His forehead couldn’t be getting bigger could it? That wasn’t possible. Then, one day, as I scanned through his profile pics, I realised what was happening: he was losing his hair.”

Through everything Michael Swift has managed to stay optimistic. “I suppose it’s kind of annoying,” shrugged the 28 year old whose hairline has now retreated to around mid-crown, “but what can you do? C’est la vie. It’s only hair. In the grand scheme of things, it’s not that important.”

Louise’s charity, ‘Men’s Hair Is Really Important’ (MHIRI), was set up in June of this year.

“Our main goal is to find a cure” said Louise, struggling to hold back tears. “Only then will I truly get the man I fell in love with back.”

It was this dream of finding a cure that led to Louise shaving off her own hair, raising money for MHIRI and using the removed hair to make toupées for sufferers (Michael, rather ungratefully, refuses to wear his).

“Luckily, unlike Michael, I can pull off the shaved look because I’ve got really good bone structure,” said Louise.

On being asked to comment of his girlfriend’s drastic new ‘do, Michael said, “It’s a nice gesture but she really didn’t have to.”

The charity is also campaigning for genetic testing to detect the disease in the womb and cut the terminal illness off at the source, before it rears its ugly, bald head.