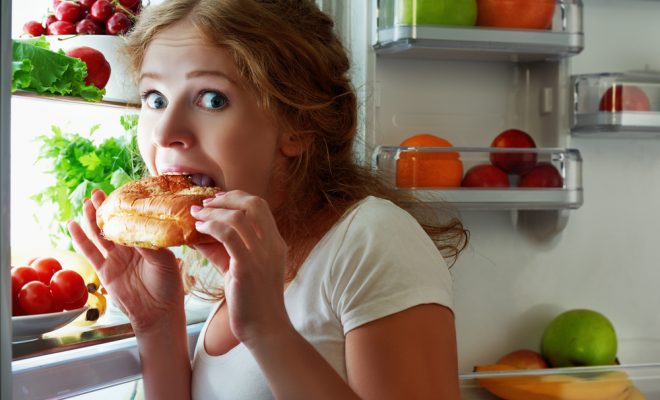 A woman from Alnwick was left “rather surprised” to find she had gained five stone after looking through recipes of health blogger Ella Woodward’s cookbook, ‘Deliciously Ella’.

Paula Harris, 32, explained  “I was looking for something to cook my vegan friend, Mark. He’s very fun and not difficult to have at a dinner party at all.”

With the unambiguous tagline ‘love your life, love your food, love yourself’, the cookbook contains over 100 plant-based, gluten-free and cortisol-inducing recipes.

“If I’m completely honest with myself I started on my chocolate stash after reading the recipe for an acai-based beetroot brownie,” Paula commented, “I wasn’t even aware I was doing it.”

A pizza recipe halfway through momentarily raised Paula’s hopes. She recounted it felt like “a light at the end of a very dark, homemade pesto-lined tunnel”. However, on discovering that instead of traditional dough the recipe called for a quinoa base, Paula started on the Baileys.

To make matters worse, Paula later discovered an empty jar of goose fat next to where she’d been sitting. “I’d bought it for the roast potatoes” Paula remarked. “I must have gone through it while reading about the versatility of courgetti”.

Paula is now the sixth woman who has reported putting on significant weight whilst rummaging for things in her fridge to spiralise. If you, or anyone you know, has a similar story, please get in touch. Right after you’ve polished off the KFC bargain bucket.

← Previous Story “It’s just a by-product of the meat industry” insists leather-clad vegetarian woman
Next Story → Help! Only one of my boobs is feminist