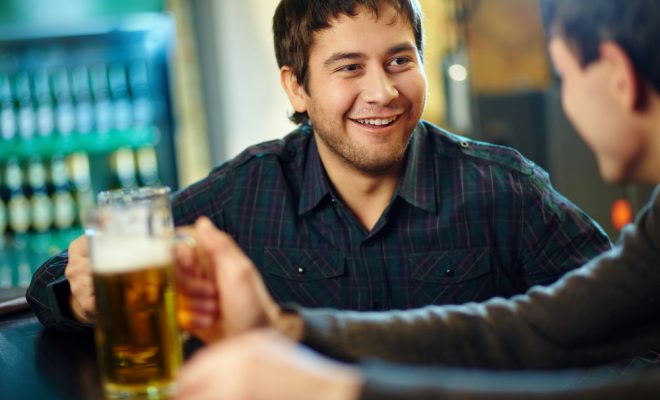 A man from Lincoln entertained his friends last night with a ribald anecdote about a one night stand with a woman who he did not find very attractive. In his bawdy story he expressed a great deal of regret about the sexual encounter for comedic effect, but in his heart he secretly really enjoyed the evening and would actually love to see the woman again.

Marcus Sheaf, 32, met Becky Davenport, 28, at his local nightclub on Saturday night. The pair hit it off on the dance floor and then went back to Becky’s house for a mediocre ten minutes of lovemaking in which both parties failed to reach orgasm.

In the pub with his exclusively male friends, Marcus described the sex as “the worst he’d ever had”, but really those ten minutes of physical contact were the most connected he’d felt to another person since Jessica walked out on him 18 months ago.

The sex was followed by an hour and a half of pillow talk, which Marcus described as Becky “just going on and on about her life while I was trying to get to sleep,” but actually he was genuinely fascinated by some of Becky’s stories about her life and her childhood, and Marcus really started opening up about his relationship with his father in the last 45 minutes.

“It was such a funny anecdote,” said Marcus’ friend Daniel Pilkington, 33. “He slept with this woman, right, but she wasn’t conventionally attractive! It was like a Monty Python sketch or something.”

“What was so great was the way he told it,” continued Daniel. “Like he was laughing but at the same time he managed to pretend there was an irrevocable sadness in his eyes, as if he had just lost something he would never recover.”

Marcus is currently spending upwards of an hour a day trying to find Becky on Facebook.

← Previous Story Incredibly generous woman seriously thinks about volunteering
Next Story → Why do men feel so threatened by my wild Siberian tiger?