Taboo! This thrill-seeking couple went to Pizza Express without a voucher 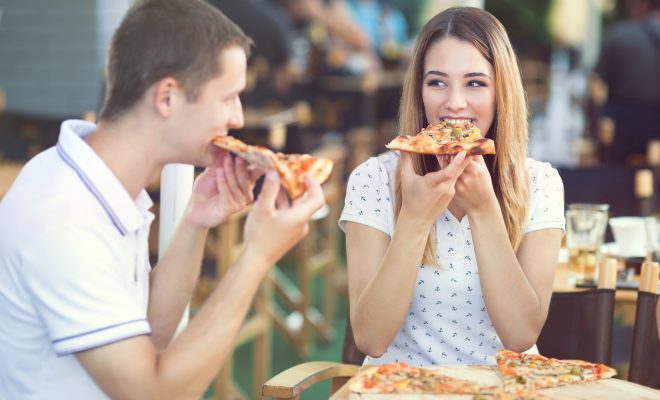 “We didn’t plan it, it just sort of happened,” admitted Louise Brady, 28. “We were walking past Pizza Express, and Adam was like ‘fancy it?'”

“At first I was taken aback,” she continued, tossing back her long, dark hair. “It was a Friday evening and everyone knows you can’t use a voucher at peak times. But there was something about his attitude and the way he as willing to throw caution to the wind that was super sexy. So, trembling with anticipation, I found myself saying ‘yes’.”

Before they knew it, the adventurous duo found themselves seated in a fancy, sound-proof booth, browsing through the menu.

“It was so romantic and wild,” giggled Louise, “the booth meant we could barely hear the screaming kids on the table next to us, or the arguing middle-aged couple on the other side. It was so secluded.”

“I don’t know what possessed me to suggest Pizza Express,” said Adam Stone, 31. “I think there was something about going in voucherless that made the experience really hot and thrilling. I think the gratuitous waste of money turned Louise on, too, because she ordered a Romana base and a side thing of olives.”

The couple then raced home, intending to have the best sex of their lives, but decided to postpone it, due to both of them having the pizza bloats.

← Previous Story I love being in a casual relationship so much I text them every five minutes just to check we’re still in one
Next Story → Awkward! Meeting the parents when your new boyfriend is the Lord of Darkness, may he feast upon me and reign forever