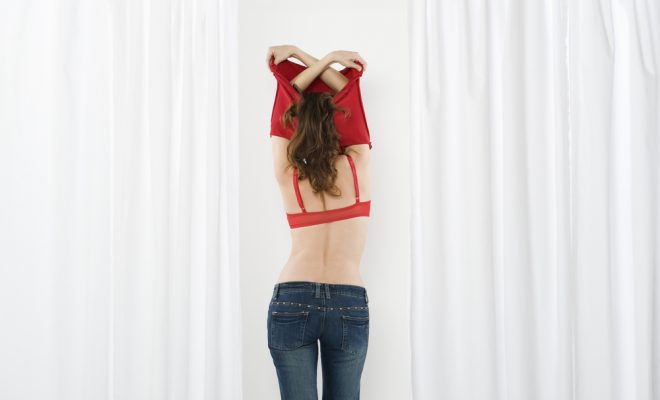 The world’s leading scientists have succeeded for the first time in reducing the gap between the changing room curtain and the wall of the cubicle.

Once thought an impossible feat, a crack team of world-class engineers, physicists and marine biologists have reduced ‘The Gap’ by an astonishing  0.006%.

The breakthrough will no doubt be met with praise by the millions of women a year who sustain injuries trying to close ‘The Gap’, while simultaneously trying to unbutton jeans or remove fiddly tops.

Theoretical physicist and project director Dr. Rhona Butler, 45, gave us an overview of the project’s ambitious origins: “It seems like a natural fact of life that in a changing room environment, curtains simply cease to function.  But why is that? Is it because the curtain is too short? Is it a pleating issue?  Are there magnets in there somehow? Were they designed by a vengeful God to test us?  These are all questions my team and I ask ourselves every day.”

Lauren Bernardi, 26, a junior research assistant on said team, remembers the first time she encountered ‘The Gap’: “I was 14 and trying on a dress in Next. I thought I’d pulled the curtain all the way over but when I looked back there was a full two inches of space on each side. I pulled and pulled, but no matter what I did, I couldn’t get it to cover the doorway, despite there being more than enough material.  That’s when I knew I had encountered one of the universe’s greatest mysteries.”

Dr. Butler’s dream team is comprised of scientists from over 20 countries, yet they receive no funding from national governments. Instead, the team’s eye-watering overhead costs are met by individual donations from every woman who’s ever been in a changing room.

With a reduction of 0.006%, progress might appear slow on the face of it, but Dr. Butler is optimistic that some unfathomable future technology, like a door, or indeed a simple fastener, may bring about a utopia where accidentally flashing a tit in H&M becomes a thing of the past.