Love is in the air for these adorable toddlers, mum decides 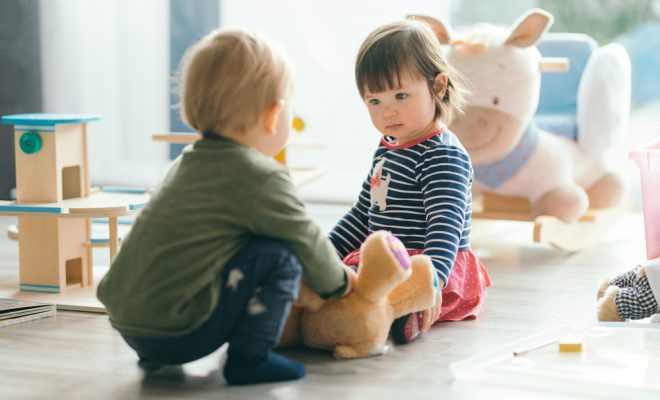 There is nothing unusual about kids making new friends at pre-school but it isn’t every day they find their soulmate. However, according to one proud mum from Bristol, this is exactly what happened to Kirsty Granger, two, and Harry Langdon, also two.

It seemed like any other afternoon for mums Helen Langdon, 29, and Lucy Granger, 35, when they went to pick up their children, but that all changed when they saw Kirsty and Harry playing together.

“It was immediately clear to me that the kids were boyfriend and girlfriend,” explained Lucy, before and announcing the exciting news on social media. The post included several photos of the two lovebirds in their buggies, which had both been moved next to each other while Helen patiently looked on.

It wasn’t long before the congratulatory comments flooded in from friends and family, cementing the relationship.

“My friends all agreed that the kids look cute together, are definitely girlfriend and boyfriend and also have the emotional maturity to understand the nature of a relationship like this,” continued Lucy.

“I could barely contain myself when I broke the news to my husband, Barry, who was speechless with excitement,” she gushed. “He did this big sigh, I think he was exasperated that he was unable to articulate his feelings about the situation.”

When the happy couple were approached for comment, Harry was all too eager to respond.

“I’m a butterfly!” Kirsty declared, flapping her arms to illustrate her point.

We wish them both the best of luck and many happy years to come.

← Previous Story Hollywood exclusive! Actual real housewife joins cast of Real Housewives
Next Story → Katie will get around to reading motivational book at some point