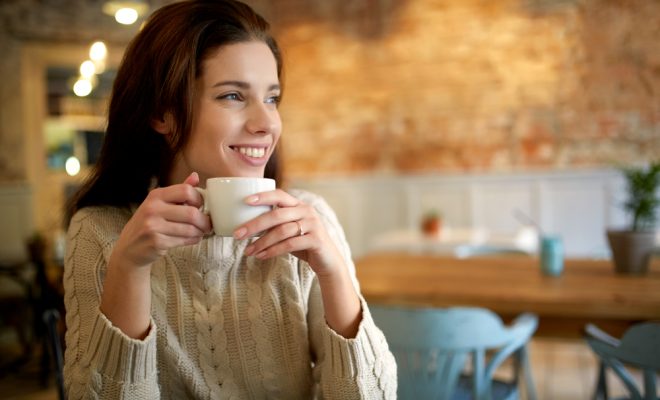 A London woman who bought a single coffee three weeks ago from a café is still sitting in that same café.

“I hadn’t initially planned to stay that long,” explained Roisin Lowe, 25, a freelance assistant social media management intern. “The plan was to buy a coffee and just use the wifi for seven or eight hours maximum. I didn’t want to take the piss.”

“So I went for a single shot americano. It’s the most time and cost-effective option: the most liquid for the cheapest price. And some extra hot water on the side to keep that puppy topped up for as long as possible.”

Roisin grew nervous as the first day came to a close, but she used her intellect to outsmart the staff.

“When it came to closing time, I just took a chance. Baristas are like T. Rexs – if you stay completely still, they won’t see you.”

The café staff made numerous attempts to encourage Roisin to leave, but she successfully foiled their advances.

“This isn’t my first rodeo – I’ve been freelance since 2014. I’ve been giving them the old ‘sip routine’, angling the cup towards my mouth whenever they shoot me a look, or ask me if I’m after anything else. I’m just sipping at nothing. If they think I’m above pretending to drink the same drink indefinitely to avoid going home, then they don’t know me at all.”

“It’s an intricate war of wits,” she continued. “Sometimes I go up to the counter, debit card in hand, about to order another coffee and then oh no…. what’s this? A phone call? I’ll just have to sit down again and take that call. That buys me another two hours. I give them hope, then I take it away.”

Roisin has been in the same seat for three weeks now, and she has no intention of leaving.

“I’m sipping at the same cup from three weeks ago. It’s caked in mould, and it’s definitely having an adverse effect on my health, but I’m getting a lot done.”

“It’s like the old saying goes, ‘if you build it, they will come… and if you don’t explicitly ask them to leave, they will rinse your Wi-Fi and your plug sockets.’”

Alex is a 25-year-old comedy writer from Brighton who refers to himself in the third person to feel important. He is the writer for, and performs as one half of, comedy duo Yes Mama!. He is an NFTS grad, and is known the world over for his tiny eyes and his love of sleek, long, nervous looking dogs.