Hero! This man knows train doors will only open if he repeatedly presses button before the light goes green 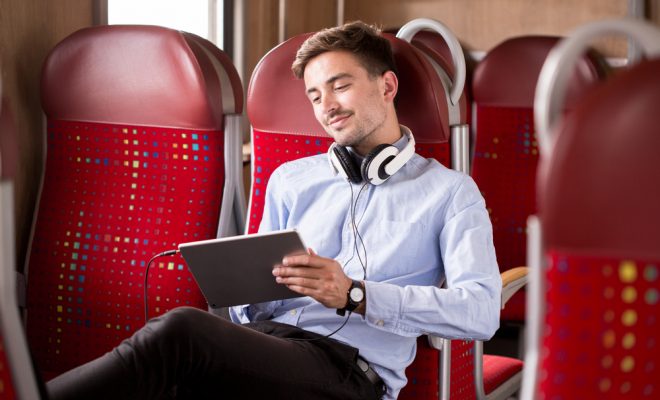 Damon Jennings, 34, an estate agent, claims to have discovered the secret to saving those all-important two seconds when alighting from the morning commuter train. If he’s right, it will drastically change the lives of some very impatient commuters.

Mr. Jennings has been getting the 07:43 into London every weekday for over four years to work at the ‘Quick! Buy!’ estate agents in Chelsea.  Until recently, he had always found the slight delay before the green lights came on to be agonising. He described, “It was painful. I mean, come on, it takes like three minutes. I’m a busy guy, I don’t have time to be waiting around for shit like that.”

Recently, though, Damon ‘discovered’ that you can ‘trick’ the door system into knowing you’re a busy person who needs to get out much faster than the rest of hoi polloi on the service. This, he says, is achieved by repeatedly tapping the ‘open’ button as soon as the train stops. He said, “I’ve done a number of experiments – well, I tried it every day for a while – and I can tell you that it definitely works. Even computers understand respect, and when a guy like me comes along, the system just knows not to mess around.”

“It opens that little bit quicker for me. You’ve got to remember to tap it repeatedly, though, you know? So it makes that annoying clicky noise? That’s essential. Actually, the louder you can get it, the more likely it is to work.”

Despite the lack of any evidence to support the claim, Damon is resolute in his theory. Cheryl Patterson, 29, an engineer, explained, “that is literally not how these doors work, or any electronic system, or any system ever. They can’t open until they’ve been unlocked: it’s really not that difficult.” However, Damon was not deterred. He said, “there’s a lot of things we don’t yet understand as human beings. I don’t understand how my way works, but it does. It just surpasses the rules, much like myself.”

Damon admitted that his rule doesn’t apply to all train travel, describing, “of course I don’t do it with those buttons you get on the doors of tube trains. I’m not a moron.”

← Previous Story How to deal with a friend who won’t stop being more attractive than you
Next Story → Jen wanted to divide the bill up equally, so we divided her up equally too