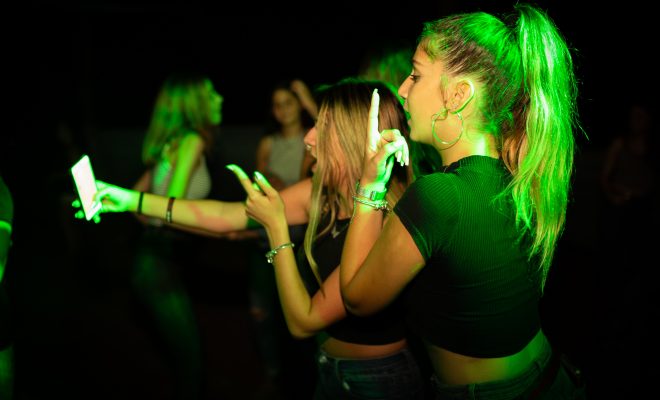 Jade Warrington, 27, a north London estate agent, made a shock announcement in a toilet at Rewind nightclub earlier this week. After stumbling to the toilet because a song that she declared to be ‘utter shite’ came on, Jade struggled to zip up her sequinned dress. Help was on hand in the form of 24 year old Nicole Evans, who not only helped her into the dress, but also commented on how beautiful it was.

“Our friendship blossomed from there,” explained Jade, putting on red lipstick just outside the lines of her lips in the mirror. “We have so much in common: we both live in London, I love animals and she has been to Twycross zoo, AND we both wear L’Oreal foundation.”

Jade then went on to search through Nicole’s phone and look at texts from her ex (an aid worker who she had split from amicably on a mutual basis) such that she could declare him ‘selfish and not worth her time’.

Before the two left the club, they spent 14 minutes laughing whilst Jade put her entire foot in a Dyson Airblade. When asked to comment on the choice of bridesmaid on the walk to the taxi, Jade’s best friend of 13 years sang the chorus to Mr Brightside and ate a chip.

← Previous Story Wow! This family friend can belittle your mental health three times in one conversation
Next Story → Flaky friend has audacity not to cancel plans when you’re really fucking tired