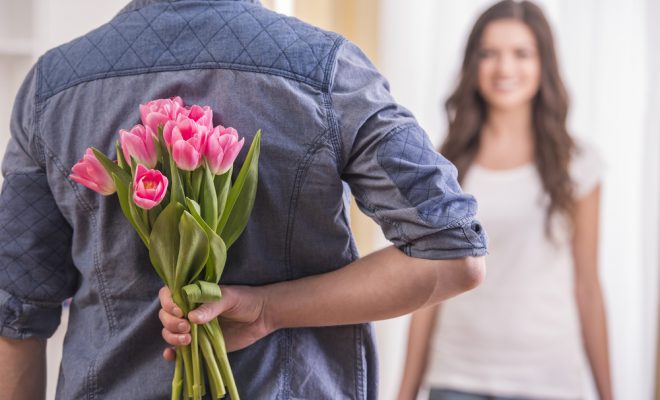 The world raised an eyebrow this morning as a Surrey man met his girlfriend at the train station with both flowers and chocolates.

“The whole thing is so shady,” explained Sally Payne. “It’s not Valentine’s Day, or our anniversary, or my birthday.”

“It feels like a set up. Am I being punked? Liam’s never met me at the train station before, either. In fact, all of our dates have been at his house so he doesn’t have to leave his room. He doesn’t even offer to pay for himself when we get a takeaway. Actually, one time when we got Dominos, he selected which pizzas we wanted and typed in the address. But then he used my card to pay for it.”

She continued, “I just thought it was great feminism. But now I’m worried. Why flowers? Why now?”

Sally expressed her substantial doubt that he’s just that nice. “I just don’t know what he’s up to, and frankly, I’m scared. What next? Is he going to start brushing his teeth before bed? You’ve got to be having a laugh.”

Liam’s mum, Anne Scott, 54, commented, “Liam’s always been a considerate, loving son.” Before quickly adding, “on opposite day!” and then she laughed for so long we gave up waiting for her to string a coherent sentence together.

“What?! No, I definitely don’t have a motive!” Insisted Liam Scott, 24, when pressed for an answer. Liam then received a text on his phone from Sally’s best mate Megan, 23, which he closed very quickly and turned his phone over so we couldn’t see what it said.

He quickly said, “I just wanted to show Sally how much she means to me.”

Sally, along with everyone who has ever met Liam, remains unconvinced.

← Previous Story How to seem aloof and unattainable by pretending to be his distant relative
Next Story → Five interior decorating tips to let him know: this is my turf now