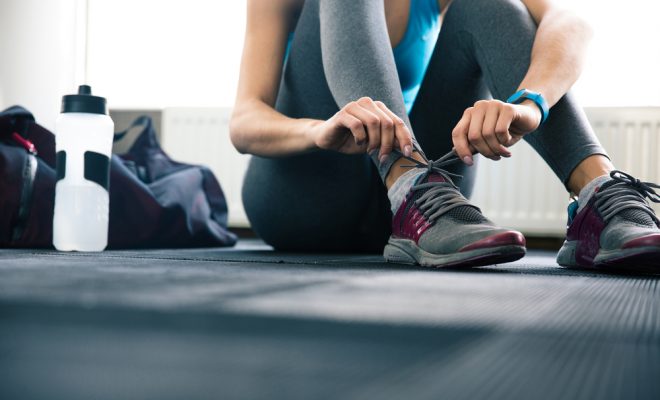 A Nantwich woman with more than two hundred pounds’ worth of sports equipment at the back of her wardrobe, found herself jolted awake last night by the sudden realisation that she had forgotten to actually undertake any kind of physical activity since she was around 15 years of age.

Flatmates of Laura Peters, 25, have confirmed that while she “talks a good game”, her random and infrequent bursts of enthusiasm for exercise have never translated into any observable action.

Kieran James, 25, stated that shortly after New Year, Laura spent a Saturday afternoon shopping on Nantwich High Street, returning to their flat that evening with a pair of top-of-the-range running shoes.

“She had them on non-stop for a fortnight, saying she had to ‘wear them in’ before she could safely run in them,” he said. “By the end of January, she had decided that she didn’t think they were ‘suited to outdoor terrain’. She wears them as slippers now.”

Tina Bridges, 26, nodded in agreement. “Back in August 2013, she went to a social event at the local tennis club with a couple of old uni friends. She bought a racket, a designer skirt and a six pack of balls the next day. To my knowledge, she hasn’t touched any of them since.”

However, one colleague has defended Laura’s record, citing a company-sponsored pilates class which she did technically attend on Red Nose Day 2015.

“She didn’t actually participate; she was worried about exacerbating an old netball injury she’d incurred in 2008,” admits Monica Gibb, 31. “But she seemed to like the look of pilates. When I asked if she was going to pursue it further, she said that she thought she would ‘thrive in a class environment’. I can’t vouch for her fitness habits since then.”

When approached for comment, Laura insisted that she “has been meaning to get around to it”, but that “other commitments have got in the way”.

“I did buy a swimming costume from the Sports Direct website about nine months ago,” she said earnestly, “and I checked out the opening times of my local pool. But when it came to the crunch, I plumped for just not going. I haven’t ruled out the possibility yet, though. Never say never.”

Luisa is a Glaswegian ex-pat and bon viveur. She used to do some bits and pieces in the Cambridge Footlights; these days, she sometimes stands up, frequently does irritating voices, and generally has a rare old time of it. Her heroes are Tina Fey, Claire from Steps, and Diane Abbott MP.

← Previous Story Freelancer quits job to concentrate on signing for neighbours’ parcels
Next Story → Genius! This freelancer adds a “wasting my fucking time” tax to their invoices