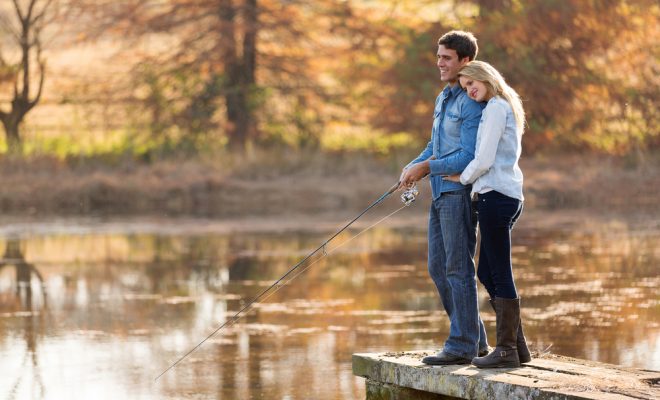 A well-meaning woman from Halifax has become a huge fan of her husband’s interest in fishing, entirely by accident.

Debbie Carlisle, 34, has been married to Derek Carlisle, 37, for seven years, and, six months ago, decided to support him in his obsession with fishing.

“He was spending so much of his time reading fishing magazines, buying fishing equipment and, of course, actually going out fishing,” explained Debbie. “I thought that if it meant that much to him, I should at least show an interest, you know, as a loving wife and all that.”

Little did Debbie know that what started out as a simple expression of love for her partner would soon become an intense passion of her own.

“It turns out I fucking love fishing”, Debbie said. “I honestly couldn’t have given a rat’s arse about it before. When I started out I was really just doing a good deed and trying to share some new experiences together with Derek. I was hoping to maybe even getting him to think differently about my interests too.”

“I thought it was pretty boring and weird,” she continued, “but there’s actually so much more to it. It’s a great way to get outdoors and get closer to nature; there are huge competitions worldwide, taking place over thousands of miles, sometimes several days at a time, with all different kinds of bodies of water and fish species. I’ve made so many friends, and it’s doing wonders for my blood pressure. It’s amazing! I think I’ve found my perfect hobby!”

A man of few words, Derek said: “I thought she’d get bored after 10 minutes”. He was later seen taking a couple of rods down to his garden shed, and emerged half an hour later dusting down an old metal detector.

“It’s great.” Debbie said, “I can’t believe that all these years we didn’t know how close we really are! Now we can spend even more time together!”

Debbie is ecstatic about the newly discovered bond with her partner and can’t wait for them to get out on the lakes together during their summer break.