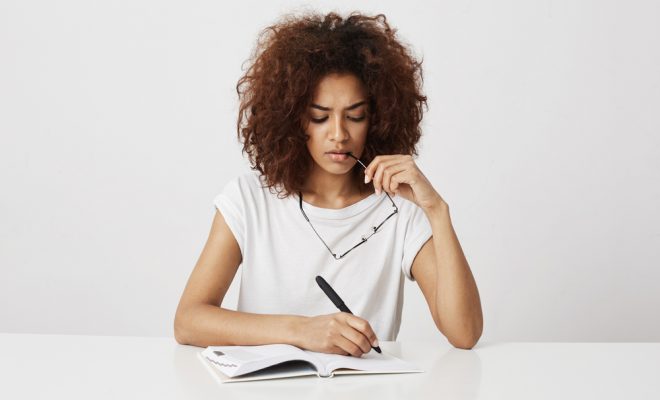 A Cardiff woman has bravely continued to write in her new diary, despite making a spelling mistake on the first page.

Before Amy Jones, 24, began her “MY BRAIN HAS TOO MANY TABS OPEN” notebook, she believed she had taken all the necessary precautions to prevent any rookie errors.

“I had practiced writing her name on a spare piece of paper; I had taken part in a small-scale egg and spoon race to test the steadiness of my hand AND I had breathed in and out,” explained Amy. “What more could I have done?”

“Page one was off to a beautiful start,” she continued. “You should have seen the way the blue gel pen shone, the perfection of the calligraphy of the date in the top right-hand corner…”

Little did Amy know that the “necessarily” in the second sentence of her written outpouring has a double ‘s’, rather than double ‘c’. By line two of her very first entry, it was game over.

“I just wanted to cry,” said Amy. “The notebook was £15. I could have got it in the sale for £10.99 if I’d bought it a week later, so I was already feeling tense about the whole endeavour. But I just thought ‘this is it, I’ve fucked it’ and went to throw it into the back of the drawer”.

But Amy had a change of heart. “I thought, ‘what if throwing this away as soon as it’s not spotless is just like all the times I’ve dumped boyfriends after the first time I saw their Spotify playlists? Or when I’ve sent back dogs I’ve adopted from the shelter, once they’ve shat in my garden?’ Maybe everything doesn’t need to be perfect…”

Six months on and Amy is now living a life of reckless frivolity. “I don’t even look before crossing the road any more. Freedom feels fantastic!”