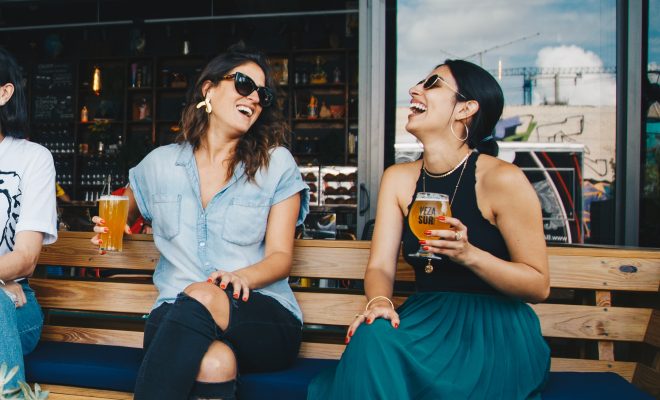 You’re out for drinks after a hard day at work with a new group of friends. You’re at the bar, you’ve ordered a coke. “A half pint, please,” you whisper seductively in the bartender’s ear.

“Not drinking?” one of your new ‘friends’ says. “Haha, yeah,” you reply. “Giving my liver a break! Last night was mad.”

That’s a complete lie. Last night you went home after work and dipped the end bits of a loaf of bread into some old, congealed hummus.

Yes, everything was going absolutely fine at the bar, you’re happily counting out the pennies from the bottom of your rucksack, but now Megan’s saying she’ll get all the drinks and you can get the next round! Fuck!

She has no idea you have £10 left in your bank account – and that’s what’s left over from a -£2500 overdraft. She doesn’t know that if you get a whole round of drinks in, with upwards of three people ordering a variety of alcohol, you won’t be able to get home! FUCKING HELL, MEGAN!

This is classic Megan, this is. She has no idea that now you can’t say no to doing rounds, because it’s basically saying “I’m going to pay for myself and I don’t want to pay for everybody else’s because I’m a cold hard bitch”. This is the liquid equivalent of everyone dividing the bill up equally after a meal. ABSOLUTELY DO ONE, MEGAN!

Why has everybody got such complicated drinks orders too? A soda and lime? What is this, The Ritz? This is an absolute nightmare, Megan, and it’s all your fault. Fuck you.

← Previous Story Quiz: Is that yoga? Or are you just sitting on the floor and crying?
Next Story → I finally got in touch with my inner child, but it turns out she’s a stinky lil brat who I hate