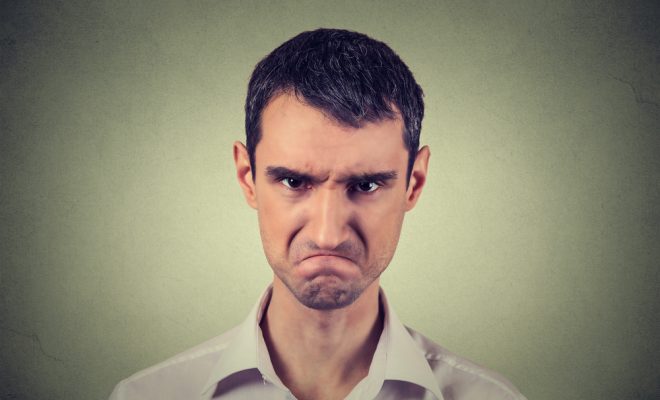 The creepy man sitting next to you on the Piccadilly line and staring at your phone screen over your shoulder also thinks you should dump Ben.

“At first, I was just standing there with my crotch in your face,” explained Liam Bonner, 43. “The way women awkwardly avert their gaze and sit as far back as possible when I do that shows me how much they’re enjoying it.”

He continued: “But then a seat became available right next to you, and it seemed like the perfect opportunity to exert my right, as a man, to sit uncomfortably close to any woman who has the misfortune of encountering me on her daily commute.”

While Liam’s initial plan had just been to gift you with regular wafts of his breath, a fruity combination of cumin, horse manure and some pungent brand of extra-strength lager you’ve rightfully never heard of, he unexpectedly found himself becoming overly invested in your romantic life.

“It was like a soap opera,” Liam recalled. “First, Ben refused to come to your best friend’s birthday party, even though you sat through the entire first season of Battlestar Galactica with him just a week earlier.”

“Then,” added Liam, “he re-gifted you the jewellery he swore he hadn’t stolen from you two weeks ago. The engraving still said ’21! We’re so proud of you. Love, mum and dad’. Sure, he wrapped it, but in a used McDonald’s takeaway bag.”

“The final straw for me, though, was when he texted a picture of your boobs to his mate, Daniel, not only horrifically violating your privacy, but confirming your worst fears that the left one is slightly smaller. That’s totally normal and, from his Facebook photos, Ben’s no prize pig himself.”

Liam issued one final plea: “you won’t listen to your friends, so I have no idea why you’d listen to me, but for the love of God, just dump the loser. Seriously. Even I can see he’s no good, and I knowingly walk around with the tip of my penis poking out of my fly.”

← Previous Story Who is she? Three pictures of your boyfriend with unexplained women from his ‘night out with the lads’
Next Story → Woman refuses to epilate as pores are “just more holes he’ll never satisfy”