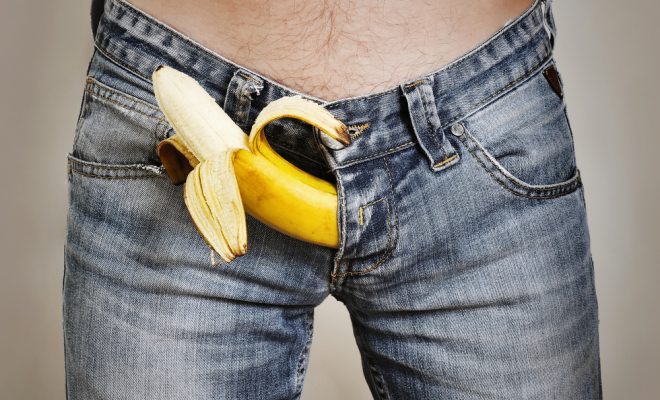 A romantic dinner for two took a turn for the sexy last night, as a Cardiff man is alleged to have removed both his trousers and pants in the company of a woman.

She went to explain: “It started off as a normal date night, we were three hours into a stunning game of Risk and luck was definitely on my side. I’d held Guatemala for over 45 minutes and the Balkan coast was about to fall to my riflemen. He rolled a two and lost Albania. I was beside myself with joy. I went to fetch another bottle of Appletiser and a couple of tumblers and by the time I got back, he had his shirt off. “

“I was shocked – I don’t think I’d ever seen a human nipple before ( I may have once glanced down in the shower but was immediately struck with inconsolable guilt and have left well alone since). His was pink and roundish, with a single hair sticking out of the middle and some pus. His chest was smooth and waxy, like a placenta, and his thorax bulged out above his belt like a VonShef icing funnel loaded with syrupy chocolate.”

“He turned to me, his greasy hair smacking against his cheek acne. He whispered ‘Come over here, bitch’ and taunted me with a little jig. Almost in a daze, I stumbled forward, upsetting the Risk board, causing a technical draw. I approached, gripped his cold, pallid arms and stared into his milky green eyes. I leaned in for the kiss. It was like suckling on a pipe.”

“He pushed me back, not too hard, and in one fluid motion, ripped off his jeans, sending metal studs flying across the room. The window (double glazed) shattered instantly but I didn’t care. He was wearing his grey pants – you know the ones – and his tumescence was partly visible through one of the holes in the front. It didn’t take much effort for him to dispose of the underwear. If anything it seemed to fall apart in his hands like candy floss.”

“There it was. A living human penis. I tried to speak but only a sort of braying noise came. The penis twitched a bit and I screamed. It was truly the best night of my life.”

Anita did not go into detail about the events of the rest of the night but from what we can gather from her from her proriskdb.com rankings, they set up the game again and played right through to 8.30pm when her boyfriend got dressed and went home.